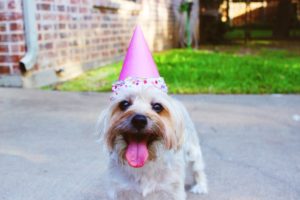 We have a new neighbor on our mountain. I met him the other day when I was marrying my beloved old puppy, whose arthritis prevents him from walking. My neighbor walked his three puppies down the hill, so of course, as mutual dog lovers, we had to stop and socialize. One of my neighbor’s dog only exercised with two legs; he had wheel contraception that took his hind legs. His other dog had a fun ride in a dog-friendly “wheelchair” with three legs, while his last puppy had a more conventional four leg. Despite their differences, all three dogs were apparently happy, healthy, enthusiastic critics.

And my beloved 14-year-old Ringo, despite his gloomy hindquarters and heavy back, is enjoying his rides, sneaking straight into the wind like any self-respecting dog.

What a surprise for our animal friends! They complain of almost nothing. Of course, if an animal is mistreated or harassed, they suffer, but under normal circumstances our fur friends accept their condition and enjoy life as it is. Immediately, ibid. Even the little lizard I met because he was missing half a tail, leans on my deck and enjoys the sun, or no tail.

What makes us humans complain of the least bit of pain? In fact, the pain does not go away and the pain worsens it. But here we moan and moan while the three legged dogs jump around happy.

I remember six dogs who were recently rescued in North Carolina. Trapped in their cage and submerged in still-rising tides, rescuers released the dogs. The puppies ran out of their cage through the water into the dry land, smacked the food the good Samaritans gave them, and wiggled their tails, “What?”

Unlike us, dogs have not looked back at their recent trauma, complaining about their days without food, frightened and cold, of course – just rescuing their canine life for once. Now given, sometimes a review of the past is useful, even necessary, for us. Check out the experience. Absolutely look for a solution or resolution. But what we don’t have to do is complain.

So I decided to give myself the most unusual gift this holiday season. I’ll finish complaining. At least as often as I can force myself to do this (challenge you!). And I invite you to join me if you want to sort out the complaint.

After all, what seems to entertain us, or dogs?